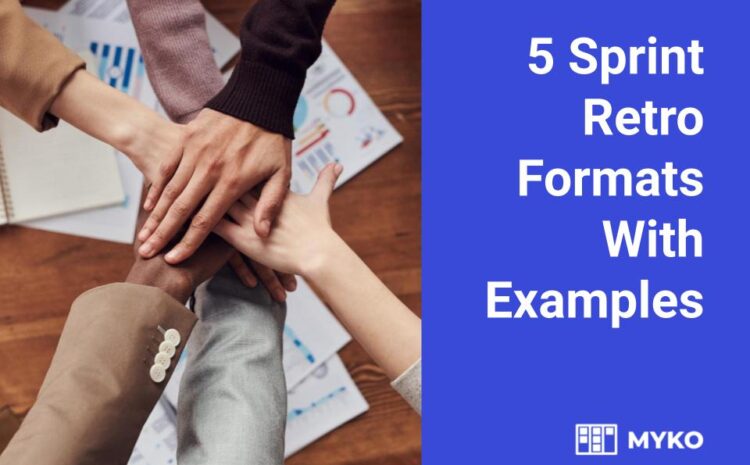 In this article we run through 5 sprint retrospective formats that your agile team can use in your next sprint retro:

1. What Went Well – Could Be Improved – Action Items

A personal favorite format of the myko team, this sprint retrospective format uses descriptive topic names which make it easier for your team to brainstorm feedback. This format is split into three topics:

Action Items can be based on the most popular topics suggested in the “What went well?” and “What could be improved?” – with a vote being an easy way to figure out which topics your team values the most and should be prioritised for the next sprint.

Here’s an example of this sprint retrospective format in action:

This retrospective format appeals to your team’s emotions, asking them to thing of things in the sprint that conjured up particular positive or negative emotions:

This format can be very effective for emotionally aware teams, as it allows them to reminisce on things that they felt rather than specific events that transpired.

This retrospective format was invented by Mary Gorman and Ellen Gottesdiener of EBG Consulting and described in their blog post The 4L’s: A Retrospective Technique. This format consists of your team splitting topics into:

This format helps teams to share knowledge (in the Learned part of the retro) and also look forward (Longed for), allowing you to identify gaps that need to be fixed in the short & long term.

Much like the Mad – Sad – Glad format, this format helps your team frame topics from an emotional perspective:

We hope this post has given you some ideas on how to run your next sprint retrospective and mix things up. Sprint retro’s shouldn’t become a chore or tax on your team, and mixing up the format can be one way to keep things fresh!

Myko is an easy to use, online agile sprint retrospective tool that fuels high performance teams